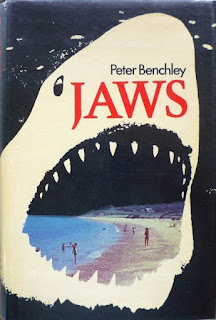 It was a shocking discovery that as great as the movie was, it basically amounted to Steven Spielberg screwing up and cheapening one of the greatest novels of the 20th century.

Peter Benchley's book is disgustingly good, with vibrant storytelling that unfolds with the urgency of a police procedural, coupled with some powerful character development, mesmerizing dialogue and overwhelming pathos for its conflicting chess pieces in an unfolding disaster that no one wants to acknowledge.

The interplay between Brody, Quint and Hooper -- which is definitely the high point of the movie -- is about a thousand times better in the book, due to the stakes being much higher and the conflict far deeper among them. Hooper is a far more complex and nefarious character in the book than the movie, and Brody's heroism is more defnied and his self-sacrifice more profound.

The movie version of the shark is more powerful and meaner than the book version, but the latter is more frightening due to the realism with which he's treated. About the only improvement the film makes on the source material is the "we're gonna need a bigger boat" line.
Posted by Phil Villarreal at 12:05 AM No comments:

Posted by Phil Villarreal at 9:03 AM No comments: 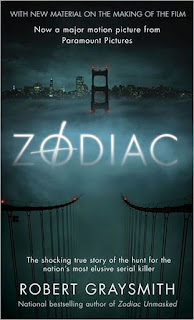 Graysmith translates his journalistic obsession with single-handedly solving the Zodiac mystery to the page with flamboyant zeal. He set the template for Dateline, 20/20 and ID shows by fusing an incredible amount of detail into a torpedo-driven narrative.

He gets in trouble by getting lost in the woods sometimes, focusing on minutiae such as which streets victims took, and adding throwaway flourishes such as conversation snippets that he surely made up. And then there is the ridiculous chapter where he tries to correlate every killing to a different lunar phase in a bizarre attempt to guess at the next Zodiac murder, which thankfully would never come.

Graysmith is most triumphant at translating his enthusiasm for the case to the reader. His skill at digging up facts that the Bay Area's law enforcement agencies lost track of or failed to share with one another to craft a cohesive portrait is mesmerizing. It's even more impressive that he doesn't hedge his bets under a guise of journalistic neutrality. He makes a case for proving the guilt of the most likely suspect, while also accepting the possibility that he could be wrong, and posing a possible alternative suspect. You come away from the book feeling like you knew all that Graysmith discovered and informed enough to form a hypothesis of your own.
Posted by Phil Villarreal at 3:30 AM No comments:

Posted by Phil Villarreal at 8:55 AM No comments:

"The Fate of the Furious" Review

Posted by Phil Villarreal at 8:57 AM No comments: 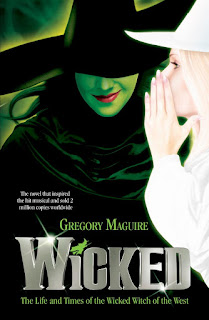 Something that always bothered me about the musical was how artificial and forced the ending seemed to be. The book is much darker and sticks truer to the characters' fatalism, making the Elpheba-Fiyero more poignant and relevant to the traditional story than a nonsensical conspiracy to run off together. If there is one thing Maguire absolutely nails, it's the finish, which is haunting and resonant down to the ending phrase. It's the struggle to get to that point that gets the author in trouble.

Maguire is a consummate overthinker, which leads to over-writing and meandering in the dense forest of details that he and he alone finds relevant. There is way more time hacking through the weeds of Oz's history and political movements than serves the story. It is cruel to compare any writer to George R.R. Martin, but Maguire could learn a lot from his economy and forward momentum in crafting sprawling words with thick, dense lore that informs every scene. Maguire's characters and intrigues wither on the vine because he chokes away their momentum too often.

The Oz that Maguire crafts is handsome and rich, but also staggeringly dull. I want the Cliff's Notes of the rest of his Wicked Years saga, but lack the energy to plow through the full experience. Guess I'll wait for the musical adaptations, even if they have fake ubeat endings.
Posted by Phil Villarreal at 11:57 PM No comments:

Posted by Phil Villarreal at 10:23 AM No comments: 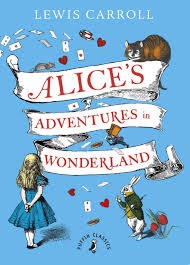 I experienced the story in a million ways before finally sitting down to read it, and it surpassed my expectations of just how weird it was. Lewis Carroll had no reservations about stifling speculation about his drug use or sanity. He wrote about whatever strange concept popped into his head, regardless of how it affected the flow of his story, his characters or the overall tone. He is out to traumatize children and adults alike, providing a flood of material for pscyh evaluations and armchair analysis. Silk-smooth, clear writing helps keep the unfocused brain dump not only readable, but consistently funny.
Posted by Phil Villarreal at 11:44 AM No comments: