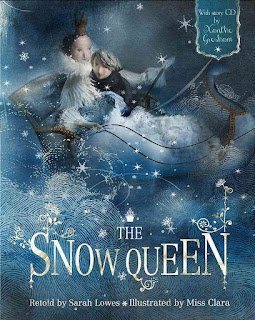 I'm surprised crack cocaine didn't exist in the days of Hans Christian Andersen, because he seems to have partaken while he was writing this. I have read some freaky old-time children's tales, so it's tough to shake me. But this one managed to do it by getting really weird and disturbing from the outset, then slamming hard on the gas and careening off the bridge and tumbling into a fireball of oblivion.

We're talking magic mirror shards that get lodged in your skin to give you superpowers, talking dolls and -- not joking -- the recurring sidekick character Baby Jesus. This story is said to be the basis of Frozen, but very little of this grease fire besides the snowy setting made it into the movie. That is for the best.
Posted by Phil Villarreal at 11:33 PM No comments:

This is one of the most fascinating, and sickening, character studies I have come across. There are two sides to Emma -- something deep and nasty that doesn't come across in the movie adaptation or the loose, modernized version, Clueless.

On one side, Emma is a conniving sociopath obsessed with manipulating everyone around her to fulfill her whims, as well as the scared child who does everything she can to suspend her childhood and avoid starting her adult life. Much of the latter persona comes from the cruel, needy influence of her dad, who pulls the same manipulative tricks on her that she does on her friends and suitors. Emma's dad maneuvers to imprison her as some sort of nonsexual pseudo-wife/servant, just as she dominates Harriet, possibly in an expression of a repressed longing to capture her as a wife/servant for herself.

While Harriet slowly manages to break free of Emma's grip, Emma wrestles against the unspoken tyranny exerted by her dad, and the high-stakes chess game plays out in a vicious satire that leaves everyone hurting for most of the time. I loved it all except for the ending, which is exuberant and fulfilling in a romantic comedy way, but feels like a cheap cop-out that dismisses some of the harrowing truths Jane Austen was building toward.
Posted by Phil Villarreal at 7:39 AM No comments: