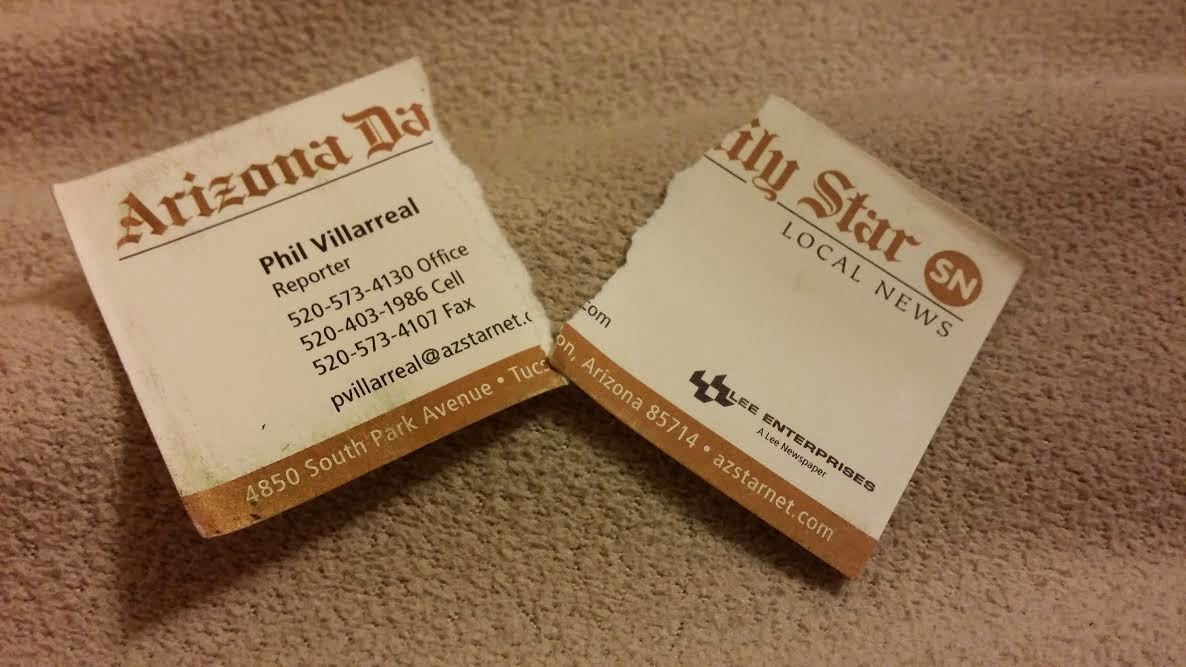 I lost my job of 17 years today. I must have left it under my bed, or maybe it fell out of my pants pocket when I was using the bathroom.

The Arizona Daily Star, which plucked me out of the crib (or out of college as an 18-year-old freshman sportswriter -- can't quite recall) and later gave me the greatest job I ever had -- 8 glorious years as a movie critic -- eliminated my regional reporter position.

This wasn't the way I'd pictured leaving. I fantasized that one day I'd be scooped up by a giant magazine or newspaper, back when such things existed, and give a tearful farewell speech that everyone in the newsroom hoped ended soon so they could cut up my goodbye cake and get back to work.

Instead, there were no tears or cake. Just as I was about to head off to lunch, I got a single-ring call on my desk phone. That's usually a sign of trouble. An editor was maybe calling me from across the room about a problem in one of my stories, or possibly an angry caller had been transferred over. I expected urgency on the other end of the line, but instead was greeted by a calm, soothing voice of an HR director, asking if I could stop by her office.

I instinctively grabbed my phone, fearing the worst. As I lumbered downstairs, I sorted through my mental files, wondering if I had done anything controversial that would merit a verbal rap on the fist. Coming up empty, I shoved the fears out of the way, hoping that HR was calling everyone down one by one to give them a rundown about some new policy change or handbook adjustment. I had worried about layoffs for many of the past several years, but strangely had slipped into a comfort zone, assuming that my job was as safe as any, and that the herd had been thinned out as much as possible for the time being.

As soon as I stepped into the office and saw a higher-up waiting for me, I knew what was going on. Like my cancer-stricken dog, Goose, when he felt the piercing of the vet's life-ending syringe in his neck, I accepted my fate with solemn dignity. Or apathy? I was told I'd be paid for the remainder of the day, receive a last paycheck and lose my benefits at midnight. They asked me to hand over my badge and lanyard and told me they'd box up all the junk in my desk for me and ship it home. The upshot, encased in kindness, was that I'd never be allowed to go anywhere near my desk again. Just like that, it was no longer my desk, but just a desk.

I was handed a two-page contract that offered me a severance check in return for my signature. To get my hands on that money I would have signed a sworn affidavit accepting responsibility for the Kennedy assassination, the Hindenburg disaster and New Coke, so I didn't much care about the specifics. Still, I read every word, signed two copies and was escorted to the parking lot by a tiny little security guard who surprised me by not selling me Girl Scout cookies afterward.

So off I drove, jobless for the first time in forever. I'd need to sort through my career prospects and contacts, see about rolling over my 401(k) (into my wallet!), check if I could somehow get Obamacare before my insurance card turned into a pumpkin at midnight, change all my social media passwords that my old computer remembered and, most urgently, finally get that lunch.
Posted by Phil Villarreal at 10:03 PM

What class you have! Even your story above was wonderfully written and most people (including me) have been there. Sad, and cliché for me to say this, but this WILL lead to better things. You're one of the BEST!

P.S. My "laying off" story here...not as good as yours, but same sediment: http://www.slowjams.com/the-brasil-story-page-21/

This is the nicest "I got laid off today" post I've ever read.
Good luck Phil. Time to take the show on the road. Finding reporting work in Tucson that pays a livable wage is tough.

This is fucked up...

That's how they treat someone with almost two decades of service?

Phil, we've never met, but I was in your spot a little more than 2 years ago after 21 years with the same company as you. It was the best thing that ever happened to me and I wish you well. And while we're telling stories about what it was like to be escorted out of the building, here was mine: http://bromehill.com/2012/02/page/4/

phil: took corporate america 30 years to get to me. they eliminated my position. replaced me with a fellow i trained to help out in my department, but gave his position another name. my wife figured i lost over $650,000 in salary and benefits if i would have continued until i reached my legal retirement age. took nearly 3 years to find another job and of course it was at 1/3 the pay and no benefits. took the savings down a chunk and when the bottom fell out of market, glory be... the IRA lost nearly 60%. if you're young you may recover... as you age, don't bet on it. good luck, kid.

Hang in there, Phil. I left corporate journalism willingly in the late '90s, but it's something I will always miss. Find your true values, be strong, and keep moving forward!

Sorry to hear that, Phil.

You have a great deal of class to accept the insulting one-size-fits-all termination policy of HR. Treating terminated employees as criminals is itself criminal. But a half day to find new health insurance that truly IS criminal.