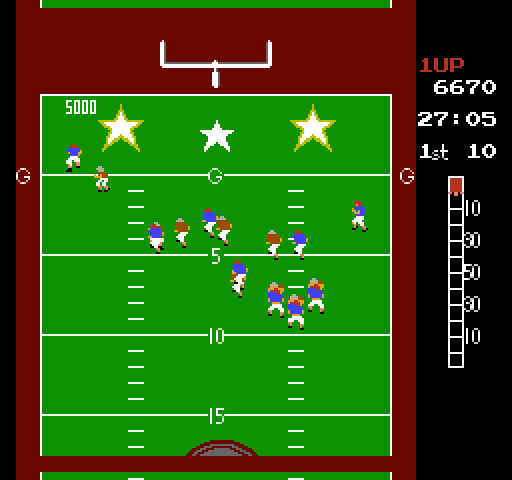 Although the NES had its highs, giving me some of my favorite gaming memories, it definitely wasn't shy about drilling us all with stinkers at regular intervals. Here are the NES games that made me cry:

10. Wrecking Crew (Nintendo, 1985) — At least one of the crappy single-screen Mario games deserved a spot on this list, and I went back and forth between this and Mario Bros. for a while. This one won out because Mario doesn't even have the ability to jump. That's right. The character originally conceived as "Jumpman" in Donkey Kong is wearing lead shoes. And unlike Bionic Commando, he doesn't even have an arm that lets him swing across platforms. Instead, your job is to whack things with a hammer, stand around because you screwed up and now must wait for your impending death, then die.


9. Anticipation (Nintendo, 1988) — "Ya know what's wrong with connect the dots?" one producer must have said to another. "There's not enough Ouija Board in it." And hence, Anticipation was born. Billing itself as Nintendo's first board game, it asked you to pass the controller around as you took turns guessing the name of the connect-the-dots object onscreen through the tedious process of scrolling through the alphabet and e v e r  s o  s l o w l y punching in usually-misspelled guess.


8. Deadly Towers (Broderbund, 1987) — NES games were notoriously tough, but this one took things overboard. You play as a dagger-tossing prince who tries to kill impossible-to-kill creatures and find hidden shops to upgrade his equipment in order to make the creatures only slightly impossible to kill. In the ages before online walkthroughs, the only way to progress was to fail miserably for hours on end, then bang your head against the wall until you hallucinated success.


7. The Simpsons: Bart vs. the Space Mutants (Acclaim, 1991) — Back when The Simpsons was new, I begged my parents for anything with Bart's face on it, and convinced myself that the crappy t-shirts, this game and The Simpsons Sing the Blues cassette tape were all amazing. Hindsight shows us the error of my ways. The brawler-style side-scroller has almost none of the charm as the far better arcade game. Awful controls ensure constant death, not only of your character but your patience.


6. Track & Field II (Konami, 1988) — If there's one way to simulate the abilities of Olympic athletes, the developers figured, it was the pounding of the A button until your skin starts to peel off. No matter whether you choe triple jump, canoeing, pole vault or any other of the events, your job was to pound that A button to build up your power level. If you had the NES Max or Advantage controllers, the game was way too easy. If you used a regular controller, it was impossible.


5. Zelda II: The Adventure of Link (Nintendo, 1988) — Throwing away most everything that made the original Zelda great, the slapped-together follow-up finds a tiny Link doll waddling through a needlessly huge overworld, only to transform into a spindly doofus who hops through side-scrolling levels when he's confronted with a monster or enters a town or dungeon. One of the few likenesses to the original this bastard child keeps is its insistence on stopping you from progressing unless you dig up items cruelly hidden from you in places you'd never think to look.


4. Urban Champion (Nintendo, 1986) — The one-on-one fighter is all about punching, blocking and avoiding falling down a sewer while dodging flower pots dropped by people who must be annoyed you couldn't find anything better to play. Your opponent never changes, you can never move on to a more interesting background and there are no special moves or even much strategy to put into play. I'm pretty sure this game was made in 10 minutes on a dare.


3. Bill and Ted's Excellent Video Game Adventure (LJN, 1991) — One way to make your game last longer is to make item you need to advance impossible to find. Bill and Ted's goes a step farther by filling each level with crazed enemies you have to avoid, giving you no time to look for stuff. Each level has a historical figure you need to find and draw into your time machine with you with one of these un-findable items by switching between two heroes stuck in parallel timelines. The game confused me on so many levels.


2. Teenage Mutant Ninja Turtles (Konami, 1989) — No game inspired as much controller-slamming rage as this brutal side-scroller. Memories of the water-set disable-the-bomb level still creep into our nightmares, and thoughts of tangling with the ridiculous bosses still makes us shudder. This brutal dream crusher was available on the Wii's Virtual Console but was yanked a few years ago. The official reason for the disappearance was "licensing issues," but I'd like to think Konami was just trying to act in the best interests of gamers everywhere by refusing to let this beast torture them any longer.


1. 10-Yard Fight (Nintendo, 1985) — I'd forgive an ancient football game for the inability to include the proper number of players on the field, but it's tougher to overlook forgetting to include things like correct scoring and plays. This rugby-like abomination avoids a soundtrack in favor of the repetitive sounds of players' footsteps and dives. Kickoffs bizarrely pit a 5-player defense against an all-but unstoppable 9-player return team. Things get easier for the defense should it be lucky enough to somehow tackle a ball carrier, because the offense is limited to a triple-option attack that gets fewer points depending on how long it takes to score. I remember being all giddy about getting to play football on my NES, only to be crushed that there was nothing close to football in the game.

Posted by Phil Villarreal at 12:41 PM