Posted by Phil Villarreal at 9:26 AM No comments: 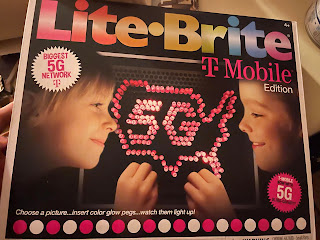 T-Mobile and Hasbro have teamed up to release an odd and retro-savvy gift idea -- A Lite-Brite consisting of magenta pieces.

The toy, available at this site, is $19.99, with free shipping through Cyber Monday.

Four of the boxes will include a Willy Wonka-style Magenta Ticket, which will give the winner two smartphones, a  year of T-Mobile Magenta Max phone service -- which includes a Netfix subscription -- a flatscreen TV and a year of T-Mobile Home Internet service.

As Lite Brites go, the magenta pegs certainly pop. So if your child is into crafting pictures promoting T-Mobile's network, this is just the right gift.

But let's face it: The only reason to buy this thing is to stash it away in hopes that it becomes a collector's item, or to angle for one of those Magenta Tickets.

T-Mobile provided the product for review.

Posted by Phil Villarreal at 5:00 AM No comments:

If there is a better musical than "Hamilton," I haven't seen it. The sheer energy that pulses through a venue as the incredibly energetic spectacle delivers one crushingly brilliant song after another is unmatchable. To attend is to feel as though you are part of something resonant and unique.

I first saw the show in Tempe in 2018, and it changed the way I thought about musicals. Heartbreaking, inspirational, incredibly catchy and noble for the strides it makes in musical theater diversity, the experience sticks with you with the impact of a first kiss.

One of the multitude of heartaches brought on by the pandemic was the cancellation of the planned 2020 tour stop in Tucson. The release of the Disney+ version with the original cast only partially sated the disappointment.

Now that vaccines and the subtle waning of the pandemic have allowed live performances to return, the production is back on tour again. As I watched with my wife, the show washed over me with cleansing properties that signified life is getting closer to what we once knew.

"Hamilton" is far more than a standard show. It's a sign of where we have been and where we are going. And it seemed that just about everyone in the audience realized that.

It helps that the And Peggy company is absolutely crammed with talent.

Julius Thomas III and Donald Webber, Jr. thrive in the lead roles of Hamilton and Burr, studied enough to pay tribute to the legacies of Lin-Manuel Miranda and Leslie Odom Jr. while confident enough to branch out the characters with their own distinct choices. Thomas underlines his complex figure's tenacity, while Webber leans hard into Burr's cool confidence ever-fractured by his insecurities.

Other standouts include Paris Nix in a dynamic double performance as Marquis de Lafayette and Thomas Jefferson. His Jefferson, in particular, channels the sass of Dave Chappelle. Brandon Louis Armstrong is a chronic scene-stealer as Hercules Mulligan and James Madison.

Victoria Ann Scovens, with her impromptu beat-boxing, and Marja Harmon are ethereal as Eliza and Angelia Schuyler, and together with Milika Cheree form a tangible chemistry as the trio of sisters who would shape history.

"Hamilton" is an absolute treat, and while still spectacular on TV, encounters new dimensions of resonance and triumph in person. If you care at all about musical theater, find a way to get to the show. You never know when you'll get your next shot.

Posted by Phil Villarreal at 12:00 AM No comments:

"Jurassic World Evolution 2" feels like the stage performance of the dress rehearsal that was the first game.

Building upon the solid foundation of the 2018 original, the park-building strategy game tasks you to craft enclosures that keep your creatures and patrons safe, healthy and happy.

If you don't have a taste for order and harmony, you can choose to lean into the chaotic aspect of the park, letting dinos run amok, letting natural enemies migrate into the same habitat and recreating wild scenarios from the movies.

At the heart of the operation, the game is all about resource management. A structured virtual sandbox with some of the same satisfaction aspects of a train set, the game hurls administrative challenges at you, putting you on the spot to decide the lesser oftwo evils.

Much of the game is dry and pragmatic, but there are moments of action that shake things up. Chasing down a stray dinosaur with a chopper and taking it down with tranquilizers is a rush.

The sequel makes more of an effort to round up characters from the films, even if the presentation is on the chintzy side, steering toward still images rather than animation.

More fluid menus and a livelier interface might have spiced things up. A wider creature selection wouldn't have hurt either. But the game has come a significant way from its first iteration, and has evolved into a fuller, more intuitive experience for fans of virtual dino displays to sink their teeth and claws into.

Posted by Phil Villarreal at 10:57 AM No comments:

"Angry Alligator" imagines a swampland in which gators aren't content to skulk in the background, waiting for prey to emerge.

Instead, your gator is an agile and incredibly hungry predator, dashing along and chomping everything it can. All the while, your life force is connected to a draining timer that requires you to keep eating or face starvation.

A game with more than a touch of shovelware features -- including slapdash visuals and a borderline cruel autosave system that has you backtracking after deaths far more often than is reasonable -- the game is often more fun than it has a right to be.

There is a simple satisfaction in rampaging through and munching largely defenseless creatures. While you do occasionally run into enemies that can ably defend themselves, you are usually the apex predator, and your deaths are often tied to meandering rather than annihilation.

The dev squad at GS2 Games clearly had deadlines to stick to, and prioritized moment-to-moment gameplay over the larger objectives, which are generally scavenger hunts or fetch quests.

"Angry Alligator" won't be anyone's Game of the Year, but it may just be the game they play while they're waiting for their GOTY cut scenes to pass. Like its antihero, the game ably takes a chomp out of your free time.

PHIL ON FILM: Movies and Shows Leaving Netflix in December 2021


For my full story, click here.
Posted by Phil Villarreal at 9:16 AM No comments:

The Autobiography of Malcolm X by Malcolm X
My rating: 5 of 5 stars

Malcolm X lived a complicated life, full of contradictions, animosity, pain and triumph. The essential civil rights figure has been analyzed and deconstructed to no end, but it's likely that the most crucial Malcolm X critic was himself.

Cowriter Alex Haley elegantly steps into the background to let Malcolm X tell his story. What results is a cohesive, often smoldering, intensely detailed narration of a life lived hard and vigorously.

Laurence Fishburne's narration in the Audible version is not so much a performance as it is a seance. Fishburne brings Malcolm X's fiery delivery to life as though he is speaking from the depths of his soul.

Malcolm X emerges to life as a vital, at times joyous figure blessed with incisive eloquence, gentle and often stinging humor, and exquisite clarity of thought.

He pulls no punches -- especially when criticizing himself -- as he traces his evolution from A-student to street hustler, to Black separatist and ultimately to a figure of compromise, reason and brotherhood. Especially near the end, he is ever aware of the coming assassination he feels blowing in the wind. His choice to live fearlessly inspite of the fatalism is commendable.

He is such a divisive figure that surely many people will refuse to hear what he has to say. Those who fail to listen will be those who lose out. He lived a hard and challenging life and his story bears listening.
Publisher provided review code.

View all my reviews
Posted by Phil Villarreal at 11:21 AM No comments:

Posted by Phil Villarreal at 8:24 AM No comments:

Posted by Phil Villarreal at 7:42 AM No comments:

A sweeping saga that merges a large-scale RPG with series-length anime cutscenes, "Tales of Arise" is a meaty endeavor that sates the thirst of series fans with dozens of hours of robust thrills, emotional hooks and bewildering twists.

No longer content to tread water with mild disappointments, Bandai Namco Games focused its collective energy on highlighting the franchise's strengths and minimizing its weaknesses.

With every bit the care that, say, Square Enix takes with mainline 'Final Fantasy" games," the devs channeled heart and intelligence into every aspect of the production. Every moment you spend with the game feels as though you are in the hands of master storytellers with something to say, as well as abundant talent to spirit you through the story.

"Tales of Arise" has the feel of a magnum opus. Although maybe the game is a bit too in love with its storytelling -- cut scenes can be a touch long-winded and laborious -- it feels like an affront to the talent on display if you choose to skip them.

Required grinding is kept at a minimum, and the combat -- which has not necessarily been a strong point of past entries -- is involving enough not to bore you. Rewarding masters of skilled orchestration akin to real-time strategy, the system discourages button-mashing while elevating the need for resource management and the strength of active and support party members in tactical roles.

A towering challenge, "Tales of Arise" can be intimidating who aren't able to mentally and spiritually commit to the entirety of the journey. But even for a casual sampler, there are rewards to be had in the experience. Miss "Tales of Arise" and you will lose out on one of the shining gems of the 2021 gaming year.

Posted by Phil Villarreal at 4:00 PM No comments:

Posted by Phil Villarreal at 6:43 AM No comments: