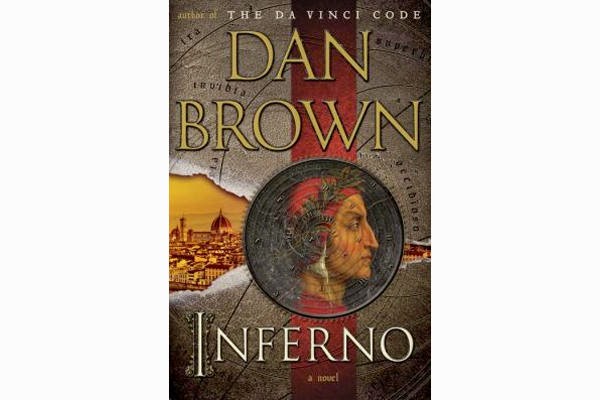 This is the worst Dan Brown book that I've read. He isn't even trying anymore - content to fall back on awful cliches and hackneyed narrative devices. He is obsessed with thought bubbles this time out, with characters thinking obvious observations to themselves. It got to the point where the thought bubbles would cause Pavlovian gags in me whenever I got to them.

Usually, at the very least, you can count on Brown for fascinating historical facts. He provides the minimum required to justify the novel, rather the flood of breathless hidden knowledge he usually cranks out. He wierldy turns Dan Brown and his sidekick into action heroes, dodging bullets, taking down enemies with martial arts moves and making acrobatic escapes. It almost rises to the level of self-parody, if the upshot wasn't so sad. This author has nothing more to say, and he should go away now. But he probably won't and I will be back like a sucker to read his next swirl of word vomit.
Posted by Phil Villarreal at 4:30 AM

This is certainly a strong assumed solution situation topic tag heuer replica sale Different watches because the device ties its supplement in an amazing, highly processed nature who will be internationally famous. tag heuer replica uk different watches will be prominent to get virtue around level of quality plus training style and design. They may be bought during pretty substantial selling prices rolex replica uk. For that reason point, many want to manage to pay for these folks. To get these individuals who would like to competence the real rolex replica sale creations as opposed to by using controlled capital, people move its aim for so that you can tag heuer replica uk different watches to receive all of just what exactly people predict with the serious models by using inexpensive selling prices.