BOOK REPORT: A Dance with Dragons 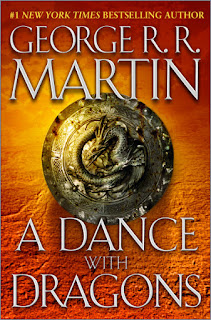 This is the point  in the series in which the series starts heading off in a different direction, and almost all the choices the producers made are more sound and cohesive.

But Martin's story is still fascinating in his own right. In book five he recaptures the pace he lost when he got stuck in the mire of the somewhat muddled A Feast for Crows, resuming killing off key characters with ferocity and arranging his chess pieces for their places in the grand final conflict he envisions, although may never actually get to because he has been battling the world's nastiest case of writer's block for several years.

If the series ends here, that would be OK, allowing the hordes of unsullied fan theory crafters to eternally pitch their ideas back and forth. There would be sad beauty in the series staying unfinished, like one of Melisandre's prophecies flittering away in the flames before in manifests.
Posted by Phil Villarreal at 5:07 AM