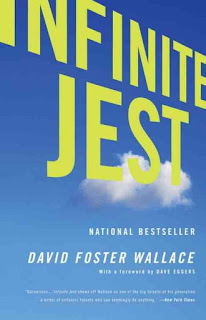 David Foster Wallace was a visionary who prophesized HDTV, Skype, Netflix, On Demand cable viewing and reality TV with this incredibly long, ludicrously annotated brain dump of a book. He knows and cares an incredible amount about Tucson and tennis -- two topics you hardly ever see pop up in novels. He's also an authority on Boston AA, the ins and outs of addiction and Ivy League academic ennui.

If Wallace had a fault, it was that too many ideas were bursting out of his head and he had trouble organizing them in a cohesive manner. "Infinite Jest" is more a compilation of barely-connected short and long stories. In the literary equivalent of channel surfing, he shifts styles every few chapters, stopping for nearly 400 footnote asides just to cram in all the stuff he felt the need to slip between the endless lines.

You get the sense that Wallace was such a genius that he was smothered and tormented by the ideas swirling around his head, and that writing was one of he ways he coped with what amounted to an isolated existence. Drugs, crappy TV and copious reading were other outlets, and he managed to boomerang his obsessions with all of them into his great masterwork, which he managed to focus enough to crank out in order to justify a life well wasted.

He took his own life, but he remains immortal in these pages, as well as in the fabric of society he saw coming 20 years ago.
Posted by Phil Villarreal at 1:48 AM