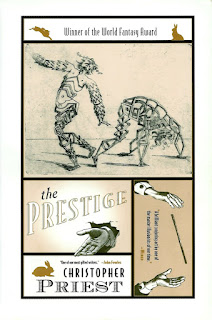 Christopher Nolan's flawed movie surpassed the strange, winding book, which takes an intriguing premise, strangles it to death midway through, then keeps on trucking long past when the curtain should have dropped on the plot.

The tale of rival magicians, told through dueling, conflicting journal entries found by their descendants, is at its best when it explores the psyches of the leads, pacing the escalation of the conflict from contentious professional conflict to blood feud and onward to mutually-destructive obsession.

Priest falters once he has to spill the secrets of each magician's special trick that they are hiding from one another. His explanation is a bizarre, supernatural copout that forces the story to wander off into the woods, never to return. Misdirection turns into directionlessness, and the story stops rather than ends.

The format, period detail and character voices are exquisite, but the botched execution fails to coalesce the moving parts into the masterpiece it could have been. The end result is a head-scratching magic trick that baffles rather than dazzles.
Posted by Phil Villarreal at 8:24 PM