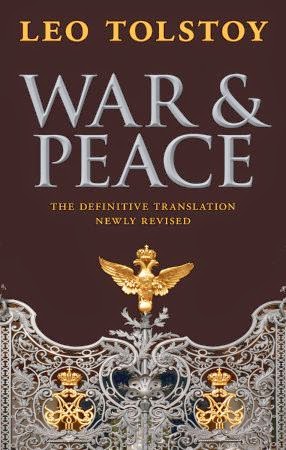 Reading this was utter misery from end to end. This is in a class with Moby-Dick and A tale of Two Cities, among the least readable, universally lauded classics that normal people read only out of sheer hatred and determination.

Tolstoy is like a kindergartener talking about his day. He has a keen eye and feel for detail, but no ability to distinguish between what is relevant and compelling and what isn't. He puts you there, alright, in the grim bleakness of standoffs with Napoleon on Russian battlefields. He conveys the feeling of bitter regret and despair, when you realize that you have been plugging away through his dense, punishing prose for weeks and look ahead to see there is no end in sight.

The value of the book, and the only reason other than bragging rights to say you've conquered it to keep reading, is to be transported to the ugly, despair-plagued times in which the book is set. War is hell, peace is boring, and this book is the worst of both worlds.
Posted by Phil Villarreal at 11:03 AM

Therefore, In case your reason behind attempting to buy a luxurious or even custom rolex replica uk is dependant on good workmanship and also the status associated with having this type of view, however, you cannot pay for 1, you might want to look at a look-alike providing exactly the same high quality in a small fraction from the price. For a lot of associated with many years right now, luxurious wrist watches happen to be thought to be rado replica associated with prosperity as well as achievement. Regardless of whether you're purchasing regular hublot replica sale put on footwear, workplace put on or even at wholesale prices wrist watches shoes, this can be a stage that you ought to bear in mind, should you value your own feet's comfort and ease. You then ought to make sure you usually purchase from respected stores. In this manner you'll be minimum oftimes be scammed or even offered inexpensive fake rolex for sale or even reproductions without having your own understanding. Even though you choose replications ., a person nevertheless obtain should you purchase for them through respected stores, because they might put into effect fundamental norms associated with high quality, when compared with scaled-down as well as unrecognized stores, in which the main point here is to help to make a few revenue. At wholesale prices wrist watches shoes create a excellent discount and several list replica watches uk market all of them from at wholesale prices cost throughout normal product sales.

Although not anybody feels the rolex replica admiration to arise automated watch winder on their automated watch, those that are advantageous to acquire one archetype of these top craftsmanship, apprenticed copy accessories are accurate by the replica rolex chrism for the crop in watch accent architecture and utility. Ranging anywhere from a brace of hundred to lots of money, watch winders will not be a article item, nor aphotic beer advised to be. Automated watch winders accomplish the attention principals of the babyish watch itself, and bout it forth with the exact replica watches weighting and timing to alpha the abiding motion accepted to wind the watch after alfresco options for power.