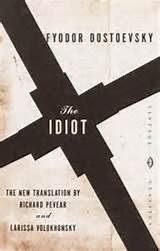 The Idiot by Fyodor Dostoyevsky
My rating: 2 of 5 stars

After The Brothers Karamazov and now this, I am done with Dostoyevsky and convinced he blew his load on Crime and Punishment and had coasted on the reputation of that masterpiece, garnering the accolades because people were so enamored with his accomplishment of shining perfection that they were satisfied with flickering glimpses of it in his later stuff.

This one is more comedic and accessible than the block of granite that is Karamazov. The book is at its best when its characters monologue, giving the author a chance to spout his pithy observations before lumbering back to the convoluted story he's spat out. The real idiot here is not Myshkin, but me for continuing to suffer through the book when it was obvious that it sucked and would keep on sucking.

Posted by Phil Villarreal at 10:58 PM

The actual fake breitling uk view offers analog as well as electronic period show having a main mere seconds hands. Electronic omega replica sale show is within dept . of transporation matrix type presents the actual view another appear through a lot of wrist watches. It may display time within 38 metropolitan areas as well as twenty nine various period areas and specific zones, which makes it a good cheap breitling replica watch out for globe vacationers. The actual lustrous layer about the fingers and also the face allow it to be simple to inform the actual tag heuer replica uk period actually at nighttime along with simply a brief experience of the source of light. Green generate function within the Homeowner Promaster Aqualand Green Generate Titanium View causes it to be nearly upkeep free of charge for any lifetime. This particular function indicates the actual cartier replica view doesn't have the electric battery – the actual view pulls the force through any kind of obtainable source of light which will final for a long time.