Book Report: To Kill A Mockingbird 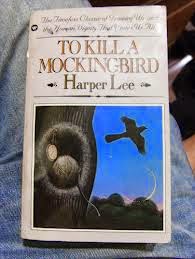 I've never read a book that was as effective a time machine back into childhood. Harper Lee's ear for the way children think and talk is spellbinding. She respects Scout, Jim and Dill and gives each of them distinct and intelligent voices. She kills it with those characters so well that Atticus comes off as stiff and underdeveloped in comparison. Part of that is because she casts him in the simplified, idealized way Scout views the adult world.

The reason the book is a treasure is the way it addresses heavy social issues with such a light, matter-of-fact touch. Lee provides a master's course in the "show don't tell" school of rhetoric, never going the easy route to spout off convenient essays as monologues to make her points. I'm disappointed in myself that it took me so long to get to one of the greatest of novels.
Posted by Phil Villarreal at 9:11 PM