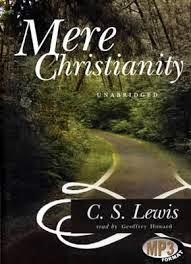 C.S. Lewis is an excellent natural storyteller. This book is even more accessible than his children's literature because it's so conversational. That's because it was adapted from radio talks he gave World War II troops to bolster their faith as they struggled through combat. You'd expect an evangelical homily to be condescending or preachy, but his self-deprecation goes miles toward keeping pompousness out of it.

When he veers out of his depth he admits as much, but still has compelling things to say. He vigorously avoids cliches and non-thinking crutches that so often go hand in hand with proselytizing. He writes with both common sense and passionate intellectualism. That helps some of Lewis's bigotry and nonsense easier to swallow than they would be if it all came from someone less skilled.
Posted by Phil Villarreal at 8:41 PM