Movie Review: Dawn Of The Planet Of The Apes 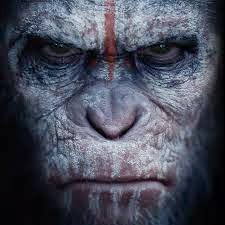 The Burton Planet of the Apes was so devastating that it managed to scare people away from seeing the remake of the remake a decade later. Which was a shame, because Rise was one of the best sci-fi movies ever created, with a heartbreaking father-son, scientist-monkey relationship.

There was so much promise to this movie. So much hope dashed. I tried to ignore the colossal red flag it waved in the first 10 minutes, as mediocrely-animated primates engaged in family drama by exchanging adorable, Monkey's Uncle-style sign language, helpfully subtitled so non ASL (Ape Sign Language)-speaking human viewers could follow along. The verbiage-free opening is so patently ridiculous that if the Scary Movie people were to, well, ape it, they wouldn't need to change a thing. Just cut, paste, and wham, you have the funniest sequence in franchise history.

Things go from bizarrely humorous to boring when the scene shifts to the human camp of this post-apocalyptic earth, a stage for a tournament of global domination between man and monkey. There's a timid leader, a regular joe, his compassionate, monkey-paw-stroking wife and their teenage son played by a guy who looks like he's 30. They want to preserve the human way of life, which according to them is to sit around and whine about having no electricity.

I give the movie credit for not only not encouraging the audience to root for the humans, but to make a compelling case to wholeheartedly cheer for the apes to overthrow these idiots and run the planet correctly. That even goes for when Scar Ape (his name is Koba, but he is really Scar from The Lion King, so I have renamed him Scar Ape) overthrows simian leader with a heart of gold Caesar and runs things like Pacino in Scarface.

The crux of the conflict is a dam that the humans need to get working so they can use their iPads and such. The apes, meanwhile, have set up camp nearby, and would rather the humans not send in their Geek Squad to fix it because of their penchant for busting caps in angry apes. Caesar, who in the first movie fell in love with humans because he was buddies with James Franco, thinks there can be a peaceful resolution, but Scar Ape is like "ARGHH OOOPP IPPPA EEA!" which roughly translates to "'Ell, nah, gov'na. Kill 'em all."

Cloverfield director Matt Reeves, who deserved credit in his calling card for going easy on the CGI, forgets that tack and allows his animators to spray the screen with dubious monkey cartoons and 'splosions. The movie turns into a long, dull slog of slow-witted humans tangling with their furry rivals in zero-sum contest of sadness. There are a few winning moments of intraspecies bonding that echo the 2011 movie, but those seem glib and forced rather than earned. Also, I hate how the apes all start off relying on sign language, only to suddenly all gain the ability so speak English like they are the Asian characters from Lost. As if it wasn't bad enough that we had to listen to the dull, hackneyed dialogue spat out by the human characters, it gets much worse when we have to listen to it spout from the mouths of apes as well.

Congratulations! You have certainly achieved the dickish and petulant tone you apparently strived for. Like the classic spoiled and entitled Millennial you are, you've succeeded in making this 'review" all about you. And dude, you come across like a real prick.

Well, I enjoyed the review. I may not agree with it, but it had its own perspective, and a few good points (I, too, would be one of those people upset that apes learned English in 2 hours, and I haven't been able to learn Spanish after 4 years). It's not like his observations are unfounded, which bothers me the most about negative reviews. The wording made me chuckle. So all in all, I think this was a good review

You make some good points. I also enjoyed the first film, Rise of the Planet of the Apes. And I was upset when they got rid of Rupert Wyatt in favor of Reeves.

However, your flippant comments about electricity & Ipads is just so wrong. I spent 2 weeks in NYC during the blackout of 02'without electricity and using my computer was the least of my concern.

You try and go without it for a while and see how well you fare. It's a necessity, not a luxury. Otherwise keep your trap shut and focus on the movie itself.

If you had spent more time watching the movie and less time writing down pithy criticisms you are trying to pass off as wit, you would have noticed the main antagonist, the ape with the scar was named Koba. It was spoken and subtitled on the screen at least a dozen times. I had my issues with the movie as well, but you invalidate all of your points by failing to even properly identify a major player in the films plot.

Also for the sake of being pedantic, it had been ten years since the outbreak. The apes didn't learn to speak in 2 hours. You are nitpicking for it's own sake, and you clearly enjoy the high you get from believing you are clever.

If your opinions are well informed maybe someone would listen, but instead you come off as a prat, but judging by your site, that's seems to be all you want to be. Mission accomplished. Well done. Keep patting yourself on the back.

This is the first SANE review I have read for this movie,.I could not believe HOW BAD this movie was on multiple levels,.I feel like there is a WORLD CONSPIRACY saying this movie is good,.Adam Sandler's last 5 movies are MASTERPIECES compared to this pathetic attmpt at movie making,.I am truly embarrassed for humanity for liking it,.I applaud this CRITIC for drawing a line in the sand,.I am DONE with Apes also!,.Thank you!

We share so many of the same criticisms with this film. The subtitled sign language really shined a spotlight on just how weak the writing was. It really is a shame, because I really wanted to like this movie, but so much just felt like a soulless rehash of better films. It's too bad you'll get your share of unnecessary angry comments because you dare post a bad review for a film everyone is supposed to love, but I guess it comes with the territory.

I guess I am one of the contrarians who agrees with the reviewer here. I thought the movie was average at best (3/5), mainly because it lost its sense of disbelief about mid-way through, along with the heavy handed morality, over the top special effects, and unnecessary literal cliffhanger Hollywood fight scene at the end. Good movies remain morally ambiguous without spelling it out for you.