Book Report: A Confederacy of Dunces 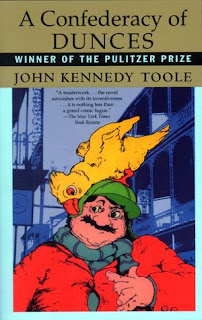 Very much a Don Quixote for the modern era. Ignatius, the obese, racist, homophobic and entitled moron, also shares a lot with Ash from Army of Darkness. There is nothing to like about the character, but he's irresistible because of his unwarranted audacity. He is a self-parody living in a parody of New Orleans, which itself is a parody of civilization. John Kennedy Toole ratchets up the absurdity and keeps the comedy flowing constantly, to create his one great masterwork before he took his own life. As he might have morbidly assumed, he didn't receive a lick of notoriety until his mom forced his ratty manuscript on a literary professor.

This is one of the funniest books I've read, with humor that's bittersweet not only because of the circumstances of its creation but because of the futility of Ignatius's grandiose plans to conquer the world with his never-finished manuscript and find true love in a stripper he sees on an advertisement and fashions to be a trapped intellectual like himself. Ignatius is an insane moron, but lovably so, and to gaze into his soul is to glimpse uncomfortably at your own incompetence. This is a beautiful book that is also an overworn joke beaten to death and resurrected, only to be killed again chapter after chapter.
Posted by Phil Villarreal at 8:01 AM