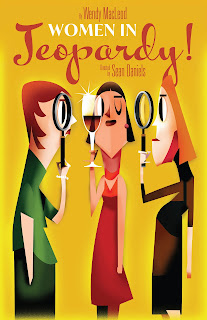 The Bechdel Test-thrashing comedy "Women in Jeopardy" manages to wring two hours of humor out of a murder mystery concept.

The focus is on three divorced middle-aged women who have forged an ironclad bond of mutual support and judgment.

Working from an insightful, irony-tinged script by Wendy MacLeod, the play maintains fluid momentum throughout its two-hour run, delighting the audience with wit and poise.

Julia Brothers plays the sassy, fatalistic Jo, who cranks out scene-stealing one-liners. Veronika Duerr, stepping in on short notice for Aysan Celik, is Mary, a down-to-earth taskmaster whose wry reactions to the shenanigans deliver continual smiles and smirks.

The third member of the trio is the flighty, impulsive Liz (Gail Rastrorfer), whose budding romance casts with the oddball dentist Jackson provides the focal point of the drama. Jackson's dental assistant has gone missing, the latest possible victim in a string of murders of young women.

Lurking on the periphery are young on-again, off-again lovers Amanda (Ashley Shamoon) -- and Trenner (Damian Garcia). Amanda, Liz's daughter, has an ill-advised camping trip planned with Jackson. Jo, Mary and Trenner conspire to undermine the trip and dig for evidence that backs up their belief that Jackson is the killer.

Filled with surprising twists, incisive observations about gender and age issues and nonstop laughs, "Women in Jeopardy" is a lighthearted treat with messages to boot.

"Women in Jeopardy" plays at the Temple of Music and Art until Feb. 5. Buy tickets here. It plays in Phoenix from Feb. 10 to Feb. 27.

Posted by Phil Villarreal at 5:41 AM