Book Report: "The Hound of the Baskervilles" 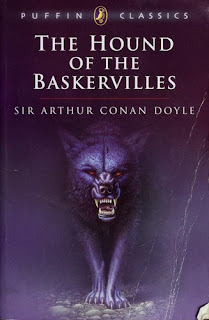 I see this as the original Scooby-Doo story. You have a supernatural threat who scares people into inaction for monetary reasons, and an end-of-story off-comes-the-mask event that shows how someone who was seemingly innocent was the ringleader for the terror.

The writing is good but the logical leaps are annoying. Sherlock makes assumptions based on probability, and if one of his 60/40 guesses were wrong he would have nothing. You have to go in with a willingness to just accept that whatever Sherlock guesses will always be right, and that the mystery will be impossible to solve unless you happen to be him, because the author doesn't give you any information that Sherlock can observe, leaving you stranded and feeling like a Watson-like moron until Sherlock rolls up and solves everything easily with his string of guesses.

Still a fun and interesting book despite its annoyances.

Posted by Phil Villarreal at 10:39 AM