Bursting at the seams with more than 200 illustrations in 192 pages of concept art, posters and relics from Disney history, "Beyond the Tiara" delves into the cash cow that is the Disney Princess phenomenon. 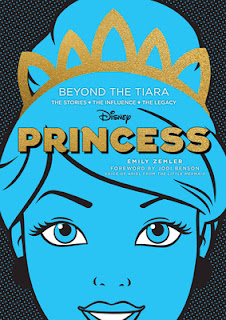 Delving into the DNA of what brought each animated character into existence, the work of author Emily Zemler pulls back the curtain on the insight, character development, voice performances and historical influence that went into each character.Included on the roster are Moana, Merida, Rapunzel, Tiana, Mulan, Pocahontas, Jasmine, Belle, Ariel, Aurora, Cinderella and Snow White.The foreword is by Jodi Benson, the voice actor behind Ariel. There are also interviews with composer Alan Menken and Lea Salonga, who voiced princess songs in "Mulan" and "Aladdin."The book seems geared to younger fans, with nods to historians who can take the rose-colored view with a grain of salt. It would have been interesting to have included some feminist voices on the evolution of the Disney Princess concept throughout the eras, as well as some comparisons with non-Disney female animated figures throughout correlating times.Still, the book stands as a gorgeous and informative coffee table tome that pays heartfelt tribute to the aspirational figures in the Disney realm.

Posted by Phil Villarreal at 1:47 AM