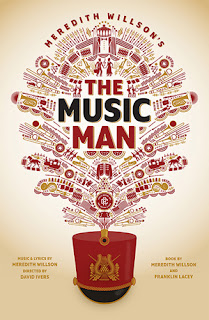 "The Music Man" tends to be one of the classic musicals that is too much taken for granted to be regarded as lively and poignant. Leave it to Arizona Theatre Company to breathe fresh life into its creaky bones of Meredith Wilson's opus.

Bill English plays title character Harold Hill with the necessarily heedless devil-may-care panache to keep him likable even as he deceives the town's innocents. He heads up a superb cast of rambunctious performers, elegant singers and athletic dancers.

Before the performance, Arizona Theatre Company's brain trust took the stage and revealed that this is the most expensive production in the organization's 52 years. The bulk of the expense seems to have gone into the elaborate sets, which switch out and flow into the narrative in seamless transitions and impressive mobility. Director David Ivers orchestrates the impressive pieces with aplomb.

The synchronicity of the sets and performers is obvious from the outset, with the opening number, "Rock Island," in which traveling salesmen gossip on a train ride. The standout number is the second song in act two, "Shipoopi," an exhausting couples routine that pushes the ballroom and stunt talents of the dancers to the limit. Choreographer Jaclyn Miller and her charges deserve a mid-show standing ovation for that number alone.

Passionate and poignant messages keep the 1957 writing relevant. The show preaches the urgency of financial support of community arts, as well as the innate need for artistic expression that often lies dormant in the heart. The metaphorical song "The Music Man" belts out rings heartfelt and true through the decades.