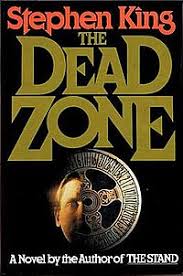 The key to "The Dead Zone" is the way Stephen King sets up false premises, only to knock them on their side as he takes you in unexpected directions.

With a title like that, as well as King's usual subject material, I expected a horror tale, or at least something heavily involved with the spirit world. Instead, the novel is free of ghosts, hauntings and horror and instead a matter-of-fact rumination about what it would like to be blessed/cursed with psychic powers.

The burden of foresight in the land of the blind is heavy. The protagonist has a superpower that makes him capable of winning big at roulette or tracking down a serial killer, but it shoves him into impossible ethical situations.

The politically-charged latter half of the book focuses on a charismatic Congressional candidate whose potential path to success would spell the doom of millions of people. The quandary that arises is to what degree it's beneficial to derail that candidate's career. As the stakes rise and increasingly drastic methods become visible, the story becomes a drama set nearly almost entirely within the character's mind.

"The Dead Zone" is an unorthodox King book, and allows him to show off his off-brand skills. He proves to be as strong and lively a storyteller as usual, and that's a result it doesn't take a psychic to predict.
Posted by Phil Villarreal at 12:45 PM