Book Report: "One Person, No Vote: How Voter Suppression is Destroying Our Democracy" 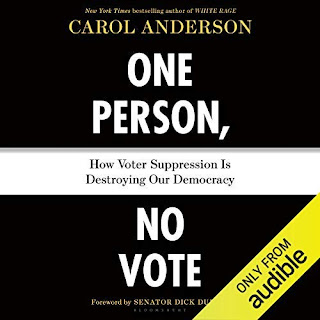 Anderson's book suffers from the tedious grind of a research paper, but at times breaks free for some righteous anger, heartfelt personal stories and biting insight. The writing gets stronger as it goes, and by the end it hits such a fever-pitch tone of righteous fury that it lives up to the promise of that potboiler title.

Still, much of the writing is bogged down in copious statistics that would have been best summarized and left as footnotes. There are droll, Leviticus-style listings of places, figures and sundry statistics that hold the main thrust of the book back rather than push it forward.

Still, even in the slow parts, this book has a whole lot to teach. Packed with a master class's worth of historical perspective, incisive examples of the evolution of Jim Crow laws and their implementation over time, the book is a chilling treatise on the decay of our democracy. She also over-relies on the word "disfranchisement," saying it so often that a related drinking game would lead to alcohol poisoning every few pages.

The sone-sided argument, well bolstered, is that conservative mechanations actively seek out to prevent the poor and minorities from voting. The conspiratorial sickness is prevalent, running from poll workers, throughout local and national political machines and all the way up through federal courts. Only a mass awareness of the adversarial nature of disenfranchisement,  a strong ground game and a determination by the affected to be more stubborn than those who seek to stop them from voting can lead to victory.

The Audible narration by Janina Edwards does Anderson's writing no favors. With a grim monotone that sometimes sounds like a voice-to-text program, she too often lacks the inflection that Anderson intended. It probably would have been best to have the author read it herself.

I spent much of the book annoyed and continuing mainly out of obligation, but found myself liking it more and more as it continued. By the end, in which Anderson gives a more incisive description of exactly how Russian hackers managed to manipulate the election via social media, I was won over. This is an important book that demands to be picked up, suffered through, appreciated and ultimately, put into action.

Publisher provided review copy.
Posted by Phil Villarreal at 6:46 AM