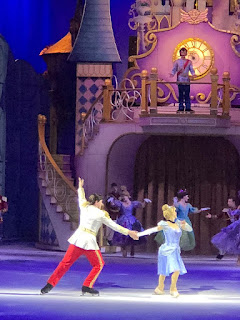 Stepping up its game considerably from years' past, the new touring "Disney on Ice" touring show marks a considerable improvement in nearly all aspects of the production.

Reimagined at every level, from set design to special effects and the acrobatic range of performance pieces, the latest edition is a dazzling thrill ride that gains momentum as it rolls, culminating in a stunning second act.

The show begins with a "Coco"-themed prelude that goes miles in upping the cultural inclusivity factor, then follows with SparkNotes versions of classics including "Cinderella," "Beauty and the Beast" and "Tangled." The kid-friendly interludes involving silly antics from Mickey, Minnie, Goofy and Donald are downplayed, making way for more focus on rehashing the animated films.

Each movie segment shows off fresh props and backgrounds and costumes. Particularly impressive are Cinderella's pumpkin carriage and the transformable "Beauty and the Beast" mansion, which opens up to reveal the library that coaxes Belle to fall for her captor.

Overall, the philosophy seems to edge away from the traditional kid-pleasing factor in an effort to appeal equally to all ages. This confident move trusts the audience to appreciate the finer points of the difficulty level involved, and assumes the kids will be just as hooked as the older crowd.

It's after the break that the show truly flexes its muscles, with robust mini-productions of "Frozen" and "Moana" thrusting the show's energy level to fever pitch. Retooled and tweaked to include the trademark songs without sacrificing too many story beats, the stories are awe-inspiring explosions of exquisite lighting, gargantuan props and massive, finely-tuned song-and-dance numbers.

The new "Disney on Ice" is something any Disney fan can wholeheartedly appreciate, without the need to qualify that love or reduce their expectations for what had been a glorified kid's show.

As Maui would sing, "You're welcome."

The show plays through Sunday at the Tucson Convention Center. Click here to see the rest of the tour stops.
Posted by Phil Villarreal at 11:10 PM