Book Report: "Goodbye, Darkness: A Memoir of the Pacific War" 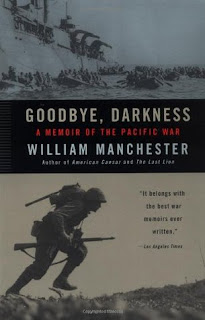 Manchester delivers a Hemingway-like rumination on war, solemnly revisiting the islands he fought on while a sergeant in the Pacific during World War II. The visits stir up chilling recollections of battle scars both physical and mental, thought-provoking essays on the brotherhood, patriotism and psychological damage from warfare.

"Goodbye Darkness" is an honest, humble account meant to deglorify whitewashed legends of heroism. For every triumph, there was collateral damage of lives snuffed out and fractured on both sides. Manchester is haunted by all his wartime deeds, even his moments the textbooks would describe as glorious. He wrote the book as a way of self-healing therapy, and his work exemplifies the burden that weighs on veterans. He references battles throughout history, juxtaposing his call of duty with the plights of soldiers dating to Thermopylae and Vietnam. His book is a chilling voyage through dark, troubled memories.

Posted by Phil Villarreal at 5:45 AM